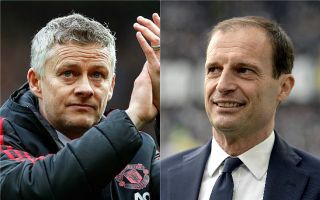 Juventus could reportedly receive a €60m windfall if Massimiliano Allegri were to replace Ole Gunnar Solskjaer at Man Utd.

As noted by The Daily Mail, the Italian tactician has been linked with the United job, and that report also adds that Mario Mandzukic is said to be a target for the Red Devils.

Further, the Mirror has also noted speculation has linked Emre Can with a return to England with United, and so it could be a busy January at Old Trafford if changes are made.

Those rumours are seemingly being reiterated by reports in Italy, as Goal Italy, via the full paper edition of Tuttosport, have claimed that Juventus are hoping that the pieces fall into place as they could receive €60m in total if Allegri, Mandzukic and Can were all to join Man Utd.

It’s claimed that they would save €10m from Allegri’s contract if he took another job,  while the rest of the figure would come from transfer fees and saved wages courtesy of the Juve duo in question.

It remains to be seen if firstly United decide to replace Solskjaer, but if they did, Allegri will surely be on their shortlist given the success that he has enjoyed in his coaching career thus far.

Mandzukic could add a new dynamic and fresh goalscoring threat to an attack struggling for goals, while having failed to replace Ander Herrera this past summer, Can could add some steeliness, solidity and technical quality in midfield where United are heavily relying on youngsters.

In turn, it would seemingly be a sensible triple swoop, and based on the report above, it’s one that Juventus are hoping comes to fruition as they could get Allegri’s wages off their books and offload two players seemingly surplus to requirements for Maurizio Sarri.