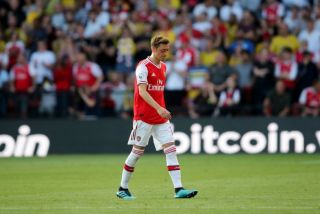 Arsenal manager Unai Emery has said that Mesut Ozil is improving and he will be given game time if the club needs him.

One of the best players in the world during his prime, the 31-year-old has made just two appearances for the Gunners this season so far. Emery has left Ozil out from his squad for most matches but said that he is an important player for the club and is improving in training.

This is our mentality and this is the way we want to create with 25 players in the squad. Mesut Ozil is in the same way and I told you now for the last three weeks he is working and improving and being better in the training. If we need him we are going use him.”

Emery has used Dani Ceballos as the attacking midfielder in Arsenal’s last few matches and the Real Madrid loanee has done decently so far. However, if Ozil keeps training hard, he could be back in being a regular for the club. When at his best, the 31-year-old can do wonders on the pitch. An in-form Ozil could be priceless for Arsenal.

The Gunners are currently third in the Premier League table with 15 points, one behind Manchester City. They will be hoping to register their fifth win of the season on Monday against Sheffield United.