Barcelona take on Eibar at the Ipurua this weekend, as the Blaugrana look to make it four wins on the spin in La Liga.

Valverde’s side have tasted victory in all of their last three league outings, beating Villarreal, Sevilla and Getafe.

MORE: Lionel Messi urges Barcelona to get a move on and beat Arsenal to transfer of €30M-rated La Liga star

Given this, the club’ll be hoping they can keep up this impressive form in tomorrow afternoon’s game against Eibar, a side who haven’t exactly started this season in great shape.

Jose Luis Mendilibar’s side have won just two of their opening eight league outings, something that means they lie in 14th in La Liga, just two points outside the drop zone.

Given this, Barca fans will surely be confident in their side’s ability to come away from tomorrow’s game with all three points, as they look to keep the pressure up on league leaders Real Madrid.

With Dembele suspended for the match following his red card against Sevilla, Valverde should bring Griezmann back into his side’s starting XI, and play him up top alongside Suarez and Messi.

The Frenchman hasn’t had the best start to his his Barca career, however he’s still world class, a factor that should convince Valverde into starting him tomorrow afternoon.

Given how well they played against Sevilla, all of Arthur Melo, Frenkie De Jong and Sergio Busquets should all be selected to start in midfield on Saturday, a decision that’ll help the Blaugrana control the game should Valverde make it.

Jordi Alba seems to have recovered from his injury given his inclusion in the club’s squad for tomorrow’s game, thus Valverde needs to include him in order to give his side an automatic edge over their opponents.

With Pique suspended for the match, Valverde should opt to start Lenglet and Todibo at centre-back tomorrow, especially considering how well the youngster played against Sevilla a few weeks ago.

Nelson Semedo’s form has been excellent recently, as we should expect to see him start at right-back ahead of Sergi Roberto, with Ter Stegen to reclaim his place between the sticks.

With all this in mind, here’s how Barcelona should be lining up for their match against Eibar tomorrow… 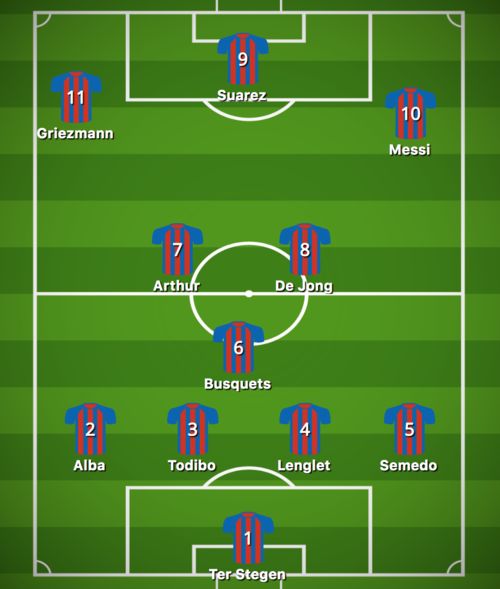