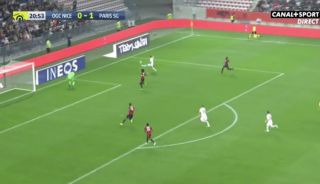 PSG and Argentina forward Angel Di Maria scored a ridiculous lob for the French giants tonight, as he handed his side a 2-0 lead in their Ligue 1 clash against OGC Nice.

Having just given his side a 1-0 lead minutes earlier, Di Maria soon bagged his, and PSG’s, second of the game in fine fashion.

After being played through on goal, Di Maria ended up lobbing to Nice goalkeeper from a tight angle to score one of the best goals you’ll have seen so far this season.