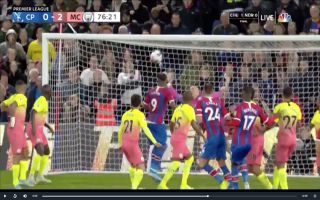 Some football fans have ranked Manchester City’s Ederson as the ‘best goalkeeper in the Premier League’ after his magnificent display against Crystal Palace.

Manchester City goalkeeper Ederson won all the plaudits after his brilliant shot-stopping display in the Citizens’ 2-0 win against Crystal Palace this evening.

The Brazilian made a stunning save to deny Christian Benteke’s header from a corner, the Samba star also made a brilliant stop to keep Wilfried Zaha’s effort from hitting the back of the net.

Check out the City stopper’s excellent save to deny Benteke:

Ederson is too good. pic.twitter.com/QZMdhj7jsy

Here’s some reaction to the 26-year-old’s exceptional performance:

If Alisson did this..

If it was De Gea made that Ederson save
?

Always makes me laugh when there is a poll for the best keeper in the league and its between Allison and De Gea. Ederson just proved why he’s in the top 2. De Gea not in the same league.

Ederson is better than alisson no cap

Ederson is miles clear of alisson

Not trying to score points with rival fans or anything like that but am I the only Liverpool fan who geniunely thinks Ederson is just (emphasis on just) a bit better than Alisson?

Ederson is crazy good, best keeper in the league??

ederson currently the best gk in the pl. unreal

Ederson is the best goalkeeper in the world.

With Alisson yet to return to action following his injury (Liverpool fans will hope he takes to the pitch tomorrow afternoon), it’s hard not to agree with the statements that Ederson is currently the best goalkeeper in the league.

Manchester United’s David De Gea is currently sidelined and it his form over the past year has dropped considerably, the two Brazilians are firmly the best stoppers in the league.

It will be exciting to see who comes out on top between Ederson and his compatriot this season, the duo will be battling for the league title and also the prestigious Golden Glove this year.