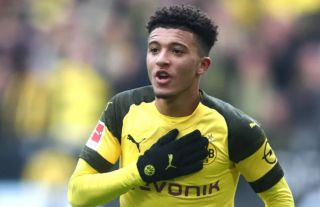 Jadon Sancho has long been a desired target for Chelsea fans, and he may well have dropped a hint that he would be keen to work with Frank Lampard.

In less positive news, the 19-year-old has been dropped from the Borussia Dortmund squad this weekend after returning late from international duty, as noted by the Sun.

However, he has seemingly made more of a stir with Chelsea fans over the claim from the Twitter user below that the England international has decided to go for Frank Lampard as his manager on his FIFA Ultimate Team.

On one hand, this surely means very little as in context it’s just a game and it’s quite a stretch going from liking a manager to actually wanting to play for him in real life.

Nevertheless, whether it’s tongue in cheek or not, the Chelsea fans below are seemingly now convinced that it’s a major hint that Sancho would be open to a move to Stamford Bridge to link up with Lampard in the future and have urged the club to make a move.

Given how Lampard is giving young English players a chance at Chelsea this season with the likes of Tammy Abraham, Mason Mount and Fikayo Tomori among those impressing, it would make sense and perhaps it’s a mere coincidence then that Sancho is being linked.

However, time will tell if a move does materialise, while he’ll surely want to avoid his situation with Dortmund escalating this week and it’s not a great sign in terms of professionalism to arrive back later than scheduled from international duty to let his club teammates down, unless he had a genuine reason.

I don’t get y ppl make a big deal out of stupid shit like this. He’s gonna play under him next year so ofc he’ll have him in his UT now. Duh.