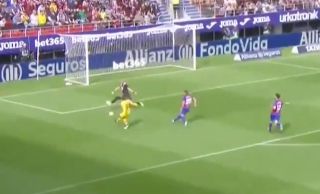 Barcelona were under pressure early on at Eibar on Saturday but their quality told as Antoine Griezmann gave them the lead after 13 minutes.

The hosts created some dangerous opportunities in the opening 10 minutes but while they impressed with their build-up play to cause the Barcelona defence problems, there was no end product.

SEE MORE: Barcelona and PSG set to clash as €100m-rated star on both their radars

That proved to be costly in the 13th minute as while Griezmann benefitted from a slip from his marker, the French international raced clear and kept his cool to slot the ball home in at the near post to give the Catalan giants the lead.

That’s the 28-year-old’s fourth goal in 10 games for the reigning La Liga champions so far this season, and he’ll be hoping to add to his tally this weekend to start proving that he can be a fundamental figure for coach Ernesto Valverde this season and beyond.

As for Barcelona, they did look more threatening after their goal, but they’ll want to put the result beyond doubt as soon as possible given Eibar’s threat in the final third as they look to close the gap at the top of the table with rivals Real Madrid leading the way ahead of kickoff.

The match is live on @goalstv3