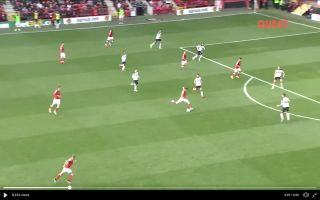 Chelsea starlet Conor Gallagher is continuing to turn in fine displays for loan club Charlton, take a look at the ace’s wonderful strike against Derby County.

Talented Chelsea midfielder Conor Gallagher is continuing to shine in the Championship this season, the ace scoured his fifth goal of the season for Charlton in their 3-0 win against Derby County this afternoon.

Gallagher got himself on the scoresheet in the 66th minute of the clash, the midfield maestro picked up the ball from miles out but showed the immense confidence he’s played with by smashing the ball into the back of the net.

The 19-year-old’s effort curled into the top corner and Derby’s goalkeeper had no chance of stopping this.

Take a look at the youngster’s stunning strike below:

Conor Gallagher with yet another goal & they keep getting better ??

Addicks boss Lee Bowyer has inspired some magnificent performances from Charlton’s youngsters this season, the side are currently 7th and look capable of pushing for a surprise play-off place this season.

It’s amazing to see that Gallagher is performing so well in what is the first ever loan spell of his career.

Frank Lampard will be keeping a close eye on the ace and it looks like he could feature for Chelsea’s first-team next season if he can continue his fine form.

Gallagher made his debut for England’s Under-21s squad in the recent international break, the youngster is quickly making a name for himself with his solid performances.