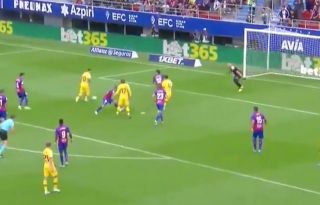 Barcelona wasted little time in doubling their lead against Eibar in the second half on Saturday with their talisman Lionel Messi getting on the scoresheet.

Antoine Griezmann had given the visitors the lead after just 13 minutes, although it was certainly a tough test for them as Eibar threatened early on.

SEE MORE: ‘Painful to watch’ and ‘tell them to pass to Griezmann’ – These Barcelona fans slam first half vs Eibar, superstar duo criticised

While they were unable to convert that into goals, Barcelona showed a more clinical edge in front of goal, and Messi doubled their lead despite not appearing to be at his best and fully fit.

As seen in the video below, the Barca superstar latched onto the ball in the box, created a yard of space for himself and produced a classy finish to give the goalkeeper no chance.

It’s that composure and quality in the final third that has seen him become so influential and decisive for the Catalan giants, and he shows no sign of slowing down even if he’s not firing on all cylinders right now after his start to the season was disrupted by injuries.