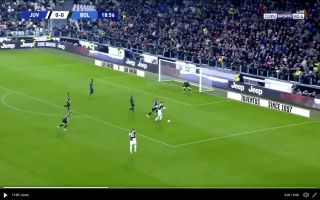 Juventus superstar Cristiano Ronaldo has fired the ‘Old Lady’ into the lead against Bologna with an amazing finish, the forward now has 701 career goals to his name.

Cristiano Ronaldo handed Juventus the lead in the 19th minute of their Serie A clash with Bologna this evening, the superstar secured his 701st career goal with a fine finish.

The former Real Madrid and Manchester United talisman picked up the ball and skipped past Bologna’s defender with his trademark silky stepovers before beating the goalkeeper at his near post.

Check out the five-time Ballon d’Or winner’s opener below:

? He wasn't going to stop at 700 goals! No. 701 brings Cristiano Ronaldo level with Gerd Müller!

? Ronaldo shows quick feet and hammers one home at the near post to give Juventus a 1-0 lead over Bologna pic.twitter.com/HyyWyJ91m0

Maurizio Sarri will be hoping that Ronaldo can help fire the Italian giants to a Champions League triumph as well as league glory this season.