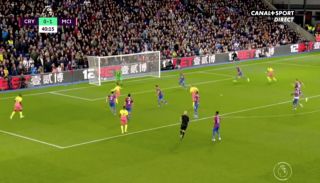 Man City turned on the style against Crystal Palace at Selhurst Park this evening, as Guardiola’s men scored one of the best counter-attacking goals you’re going to see this season.

After winning possession in their own half, City broke at pace through De Bruyne, with the ball eventually finding its way to Sterling, whose brilliant ball over the top was volleyed home by David Silva.

CITY AT THEIR BEST! ?

A devastating counter attack from @ManCity is finished expertly by David Silva ?

It was a rapid, brilliant counter from the away side, who now look to be in complete control against Hodgson’s men in south London.