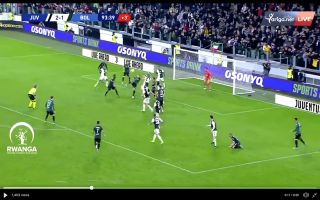 Juventus legend Gianluigi Buffon proved that he’s one of the best goalkeepers ever by denying Santander’s last-gasp overhead kick with a superb save.

Gianluigi Buffon showed that he’s still like a brick wall at 41 years old by making a game-winning save for Juventus in their Serie A clash with Bologna on Saturday evening.

In the final moments of Juventus’ 2-1 victory over Bologna tonight, the Serie A minnows nearly stunned the champions as a header rattled against the crossbar.

The rebound bounced around the box before forward Federico Santander aimed a stunning overhead kick towards goal, Buffon somehow managed to tip the ball over the bar with a brilliant one-handed save.

Take a look at the veteran’s unbelievable save below:

The Italian’s save secured a victory for Maurizio Sarri’s side.

Buffon is simply one of the best goalkeepers to ever stand between the sticks.