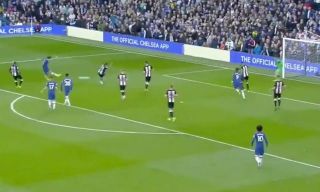 Chelsea eventually found a way past Newcastle United at Stamford Bridge on Saturday as Marcos Alonso broke the deadlock for the hosts.

The Blues were looking for their fifth straight win across all competitions, with Frank Lampard overseeing a decent run of form as they look to break into the top four in the Premier League table.

SEE MORE: ‘Sancho to Chelsea confirmed’ and ‘buy him now’ – These Chelsea fans react to Sancho ‘hint’ over Lampard link up

It looked as though they might have been left frustrated as the minutes ticked away in their clash with Newcastle, but as seen in the video below, Alonso was on hand to blast home a finish which was too much for Martin Dubravka to handle.

The Newcastle goalkeeper should perhaps have done better having got his hands to it, but such was the power behind the shot, he seemingly couldn’t keep it out as the Chelsea players wheeled away in celebration.

It’s a big moment for Alonso too having been under pressure from Emerson Palmieri to keep his place in the line-up, and he’ll hope that he can continue to deliver for Lampard both defensively and in attack to keep Chelsea’s good run going.