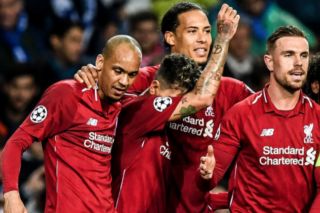 Liverpool went into half time trailing 1-0 against Man United this afternoon, with the Reds’ 100% start to their PL season now seriously under threat.

A lone goal from Marcus Rashford just before the break has proven to be the difference between the two sides in the end, as Solskjaer’s men look to claim just their third win of the season.

United have done well to nullify Liverpool’s attack, whilst the Reds haven’t exactly been at their best themselves.

A number of Liverpool’s players didn’t exactly have the best 45 minutes of their careers during the first half against United, with one of these seemingly being Jordan Henderson should these tweets be anything to go off.

The England international has been somewhat wasteful and slow in midfield, something that has lead ot a number of Reds fans to take to Twitter to call for the player to be subbed off at half time.

And given how much Liverpool need a goal here, we think Klopp should start thinking about doing so too…

Get Henderson off the field please

Henderson off for Ox or Keita ASAP

Take that joke man Henderson off the pitch as well

GET HENDERSON OFF THE PICTH FFS

Henderson needs to get off this pitch

I need Henderson off this pitch rn

Get Henderson off for a start. For Ox or Keita, not Milner.