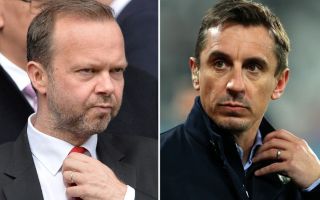 Manchester United executive vice-chairman Ed Woodward is reportedly ready to hand a role to Red Devils legend Gary Neville in a bid to heal their rift.

Neville has been publicly critical of Woodward’s running of the club as United continue to struggle on the pitch after a dismal few years since Sir Alex Ferguson retired from management in 2013.

According to the Daily Mirror, Woodward is now keen to build bridges and get Neville on board at Old Trafford to continue the bid to have former players influencing things behind the scenes.

The likes of Nicky Butt, Patrice Evra and Darren Fletcher already have roles at Man Utd, according to the Mirror, and there’s surely room for someone with Neville’s expertise as well.

The former United defender was one of the most important players of the Ferguson era, and has also shown great insight into the game during his post-playing career as a pundit.

As quoted by the Mirror, Neville previously said of Woodward: “I don’t believe the guy at the top should be there doing it any more, I think he has had his chance.”

It remains to be seen if he would therefore accept a position under Woodward, and it’s not entirely clear from the Mirror’s report precisely what his role would be.