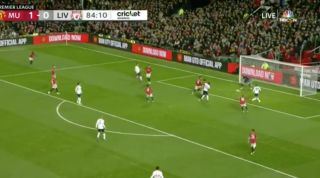 Adam Lallana bagged a late equaliser for Liverpool this evening, as the Reds finally found a way through Man United’s defence at Old Trafford.

Having been 1-0 down thanks to a first half goal from Marcus Rashford, the Merseyside club had to wait until the 84th minute before finding an equaliser.

The goal itself come after a cross from Andy Robertson slipped through all of United’s defence, finding its way to Lallana at the back post, who slotted home into an empty net.