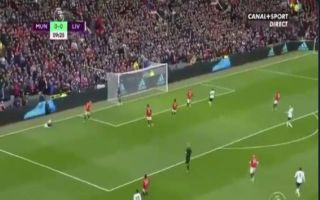 This definitely looks like something that will look foolish by the end of the Man United vs Liverpool game. Roberto Firmino had a shocker here, but he definitely has the quality to make the difference in this game.

It looks a bit like he’s caught in two minds and off balance as he puts everything into this shot. It’s just shame that the end result was truly terrible:

Roberto Firmino giving a tribute to Marcus Rashford during the match..

It’s all about respect. More than a game! pic.twitter.com/SMIlkSjL2Q

It does seem like Rashford might do this based on recent form. The England striker has actually had a decent start to the game, he looks sharp and has Virgil van Dijk on edge with some runs in behind.

Firmino will be hoping this isn’t the defining moment of his game today.