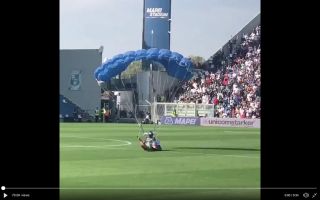 Inter Milan’s thrilling Serie A encounter earlier today was strangely delayed after a pitch invader decided to storm onto the pitch by flying in on a parachute.

This afternoon’s Serie A clash between Inter Milan and Sassuolo was stopped for a short time after someone decided to invade the pitch by flying in on a parachute.

This wasn’t the only treat that fans at the Mapei Stadium got to witness though, the high-flying pitch invader managed to land on the halfway line before jumping to his feet.

Take a look at the high-flying gatecrasher below:

Someone just landed on the pitch with a parachute during the game between Inter Milan and Sassuolo ?? ?pic.twitter.com/BwyoMYmUgg

This creative fan has shown that there’s levels to the pitch invasion game with his antics today.