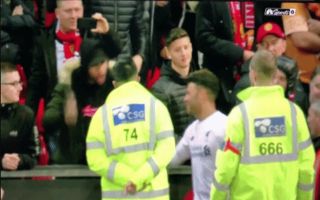 Liverpool star Alex Oxlade-Chamberlain was involved in a heated argument with some Manchester United fans at full time after his side’s 1-1 draw.

Liverpool midfielder Alex Oxlade-Chamberlain appeared to get into a heated argument with some Manchester United fans after his side’s 1-1 draw at Old Trafford.

The 26-year-old seemed to offer some fans that were abusing him with a handshake, whilst he had a cheeky grin on his face.

This probably wasn’t the best thing for Oxlade-Chamberlain to do when he addressed the boo-boys, however the reaction of the fans in question was disgusting.

One fan angrily rejected the midfielder’s handshake and another showed his immaturity by pulling his hand away after Ox seemed to genuinely attempt to smooth things over.

Take a look at the incident below, courtesy of Sky Sports:

These United fans weren't so welcoming after giving Ox shit when he was warming up ??????? pic.twitter.com/wXs3nN00cy

Just caught this. Seems a couple fans were mad at the OX from r/soccer

Can’t believe grown guys are acting like this, especially towards an England international that has been fantastic for the Three Lions.

We hardly expect rival fans to cheer the opposition’s players while they’re warming up, but we thought that people would act with a bit more dignity and respect after a match is over.