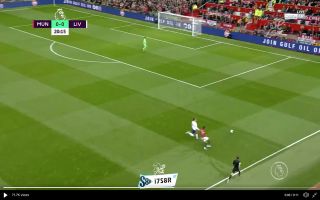 Manchester United ace Marcus Rashford could be on the way back to this best if his performance so far against Liverpool is anything to go off, here he is vs VVD.

In the 20th minute of the clash, the Manchester United ace outpaced the Dutchman before sending him to the ground with some surprise strength.

Some fans would’ve never imagined that Rashford could do this:

…the moment Rashford delivered Van Dijk and he received his anointing ???????#MUNLIV pic.twitter.com/nuhola9B6t

Is this your Van Dijk? ???
Rashford made him crawl like a toddler ??#MUNLIV pic.twitter.com/jLJjltFkeU

Rashford seems as though he’s about to turn a corner after today’s performance.

The ace has struggled for the most part of the season but a goal for England and coming back to a mammoth clash seems to have got him back to his best.