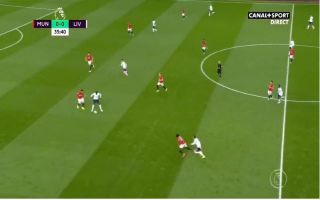 There’s no doubt that VAR could be a success if there were consistent guidelines about what it should be used for and if it actually managed to pick up fouls that are pivotal to a goal being scored.

The Sky Sports commentators probably have a point about letting the actual on field referee have a look at the incident to make a decision. There’s a feeling that refs don’t want to tell each other they are wrong so the on-field official should get a chance to see it again.

It works in the NFL and it could work here. That won’t damped United fan’s spirits as Marcus Rashford pounced to put Ole Gunnar Solskjaer’s side in front:

What a ball from James and Super movement from Rashford there. ????pic.twitter.com/uFgEx81uIs

You can see it clearly in the first video that Origi gets fouled deep into the United half. You could ask how far should we go back into a move to look for fouls, but Liverpool will be annoyed at this.

It didn’t help they had a goal of their own ruled out moments afterwards due to a Mane handball. Klopp is getting more and more furious on the touchline too.