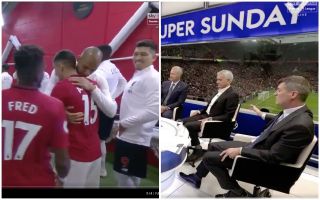 Premier League great Roy Keane couldn’t believe his eyes when he spotted Manchester United’s and Liverpool’s players “hugging and kissing” each other before today’s mammoth encounter.

Brazilians Roberto Firmino, Fabinho, Fred and Andreas Pereira were all happy to see each other and embraced in the tunnel before they marched out for what Keane described as ‘war’.

Here’s what the passionate Irishman had to say on United’s players:

"You're going to war. Hugging and kissing. Don't even look at the opposition!"

?"They're going to war and they're hugging and kissing" ? pic.twitter.com/5bmKx8rzS2

Surely Keane is blowing this out of proportion a little bit? Is players greeting one another before a match really such a serious issue?