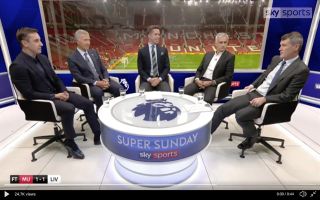 Some football fans will be hoping to see more punditry from Roy Keane, the Manchester United legend is natural TV gold. Take a look at this hilarious moment on Sky Sports.

Premier League great Roy Keane simply suggested that Manchester United needed to sign Harry Kane from Tottenham Hotspur if they were serious about getting their frontline to a world class level.

The Irishman said that United need to “go and get him” and the Sky Sports panel including Gary Neville, Graeme Souness and Jose Mourinho were left stunned.

No one spoke and Neville jokingly replied with: “You’ll be popular with Spurs fans”, Keane maintained his point and hit back with “Go and get him”.

The panel were once again left red-faced which led to hard-man Keane hitting back by saying “What are you all staring at?”

Keane really is TV gold, we need to see more of him on our screens:

"Go and get Kane from Spurs, it's easy. What are you all staring at?" ?

? "Go and get Kane from Spurs, easy. They’re in disarray, go and get him. What are you all staring at?”pic.twitter.com/BC5Tpx0TBm

‘What you all staring at’

Keane looks like one of the very few people that you’ll see that keeps that SAME ENERGY wherever he goes.

We hope to see more of the retired midfielder this season, he’s a great character that adds heaps to analysis.