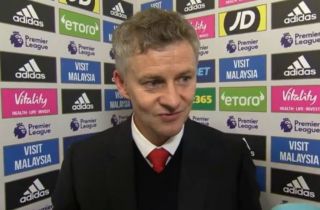 Ole Gunnar Solskjaer believes that VAR’s decision not to overturn Manchester United’s goal against Liverpool today was the right call.

In the build-up to Marcus Rashford opening the scoring at Old Trafford, Divock Origi seemed to be fouled by United defender Victor Lindelof, however despite VAR taking a look at the incident, the goal was allowed to stand.

Following this, the Reds also had a goal ruled out by VAR, after Sadio Mane was adjudged to have controlled a pass with his hand before firing into the net.

These incidents have come on a weekend full of VAR controversy, with United boss Solskjaer even getting himself involved in the debate following United’s draw vs Liverpool today.

As seen in the tweet below, Solskjaer confirmed that he thinks VAR was right to allow United’s goal to stand, stating that ‘this isn’t basketball’.

Solskjaer told Klopp said it was a foul on Origi

"No chance. We are not playing basketball."#MUFC #LFC

A lot has been said and made about VAR since its introduction into the Premier League at the start of the season, with today’s incidents not really doing the technology any favours whatsoever.

VAR seems like it’s here to stay, thus it seems like we can get used to more of these controversial incidents, and the debates that come with them, for rest of the season.

We’re tired of it already, if we’re being honest…