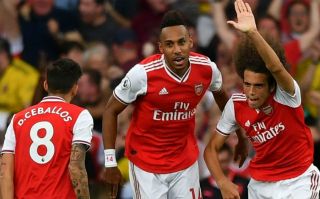 Arsenal striker Pierre-Emerick Aubameyang has spoken out about his superb form in the Premier League so far this season.

The Gabon international has been on fire for the Gunners and picked up the player of the month prize for September after five goals in four games last month.

In a rather daunting message for Premier League defences, Aubameyang explained his fine form and suggests there’s only more to come from him.

Speaking to the Premier League’s official site, the 30-year-old said he’s feeling free in the way that he’s playing right now and that he’s going to try to keep his high level up.

“I don’t know if it’s the best form of my career but it’s a good one so I will try to keep the level up.”

Pierre-Emerick Aubameyang celebrates a goal for Arsenal against Manchester United

If Aubameyang can indeed keep this prolific form going, Arsenal surely have a big chance of making it back into the top four after a difficult few years without Champions League football.

On the club’s aims for the season, Aubameyang sent a defiant message that he was confident they would get back into those Champions League qualification places.

He added: “I’m sure we will achieve the top four. That’s the goal. That’s our aim.”