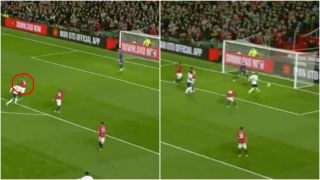 The Red Devils took a first half lead through Marcus Rashford and looked on course for a big upset as they led 1-0 in the closing stages.

MORE: Barcelona could steal Man United ace for nothing if contract talks are not successful

However, Liverpool eventually broke the home side down as Lallana finished well from close range to make it 1-1 and rescue a point for the league leaders.

It looks, though, like the goal could have been defended better as Giggs, speaking on Optus Sport, as quoted by the Metro, singled out Rojo for blame as he lost his man in the box.

The Welshman believes the Argentine was wrong to try and anticipate where the ball was going instead of simply sticking to marking Lallana.

“[Aaron] Wan-Bissaka has not played a lot of games, maybe if he was a little bit fitter and sharper he would have got out quicker,” Giggs said.

And the goal that saw Liverpool maintain their unbeaten start to the season ?pic.twitter.com/ifmhesudkm

“But for Rojo to actually go past [Harry] Maguire is strange. If he holds his position maybe he can clear it.

“Ash [Young] never really gets goal-side. But if you watch Rojo he just anticipates where the ball is going to be instead of staying with his man.

“I think it’s a poor goal to give away.”

Rojo is not normally a regular for Man Utd after an unconvincing few years at the club, but was forced into Ole Gunnar Solskjaer’s starting XI yesterday as Axel Tuanzebe pulled out of the match late on.