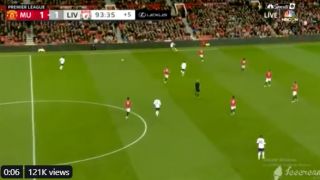 Some Manchester United fans could be heard aiming a sickening chant at Liverpool during their 1-1 clash at Old Trafford on Sunday.

Watch the video below as some Red Devils supporters can be heard appearing to chant a reference to the Hillsborough disaster of 1989 and the Sun’s coverage of it.

Listen to the Man United fans singing “The sun was right, you’re murderers.”

Not just a few idiots either, that’s thousands singing. This is absolutely disgusting. pic.twitter.com/LD9buznrYP

Surely most Man Utd fans wouldn’t condone this, though it does sound like a pretty large section of the crowd joined in.

It remains to be seen if any action will be taken here, but however strong the rivalry between the two clubs, neither side should be resorting to mocking each other over sensitive issues like this.