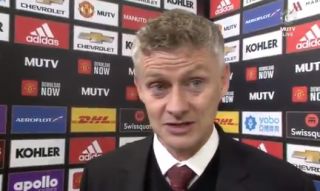 Manchester United manager Ole Gunnar Solskjaer has explained his thinking behind the tactical switch that helped his side to a 1-1 draw with Liverpool.

The Red Devils boss switched to three at the back against Jurgen Klopp’s side at Old Trafford yesterday, and his team were unlucky not to come away with an unexpected victory.

Ole reacts to today's result and explains his thinking behind a slight change in formation for #MUFC ?#MUNLIV pic.twitter.com/mM93OoLaYA

Aaron Wan-Bissaka and Ashley Young played well as wing-backs, with United looking far more convincing than in most of their matches this season.

Watch the video above as Solskjaer explains his thinking and why he felt it worked well in nullifying an in-form Liverpool side.