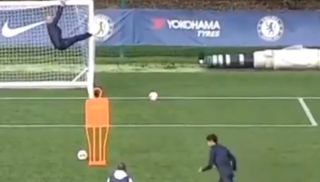 Chelsea left-back Marcos Alonso showed just how accurate he is with his shooting from free-kicks – with a little help from goalkeeper Willy Caballero!

Watch this hilarious training clip below, which shows Caballero clinging to the frame of the goal to give Alonso a smaller target to aim for.

How do you find the top corner? ?

It’s no trouble for a sharp-shooter like Alonso, though, who nails his effort, sending it right into the top corner.

This was a bit risky from Caballero though, who wouldn’t have appreciated it if Alonso got his effort slightly wrong…