Barcelona take on Slavia Prague away from home in the Champions League this week, as Ernesto Valverde’s side look to go top of their group.

The Blaugrana are unbeaten in the CL so far this year, winning one and drawing one of their two opening games so far, which have come against Inter Milan and Dortmund respectively.

This week, the Spanish giants will be heading to the Czech capital to take on Slavia Prague in a match that shouldn’t cause the Blaugrana too many problems.

Valverde’s men heading into the match in great form having one all five of their last five games in all competitions, a run which includes a 4-0 win against Sevilla and 3-0 win against Eibar.

Given this, Barca fans will surely be confident in their side’s ability to come away from tomorrow’s match with all three points, as they look to leapfrog Dortmund to go top of their CL group.

For the match, we wouldn’t be surprised to see Valverde give Griezmann a rest and drop him to the bench, a move which should see Dembele claim a starting role alongside Messi and Suarez in attack if it were to happen.

The Frenchman has been in good form so far this term, bagging four goals and three assists in all competitions.

Griezmann has played all 90 minutes in eight of Barca’s 10 games so far this year, and given the quality of opposition they’re coming up against on Wednesday, Valverde should definitely think about resting the forward.

Given that both De Jong and Arthur were subbed off during Barca’s 3-0 win over Eibar on Saturday, we should expect to see both starting in Prague this week, with Sergio Busquets accompanying them in the middle of the park.

Sergi Roberto picked up an injury during Barca’s win over Eibar, thus Semedo should be selected to start alongside a back four of Alba, Lenglet and Pique in mid-week, with Ter Stegen keeping his place in goal.

With all this in mind, here’s how we think Barcelona should line-up for their Champions League clash against Slavia Prague on Wednesday… 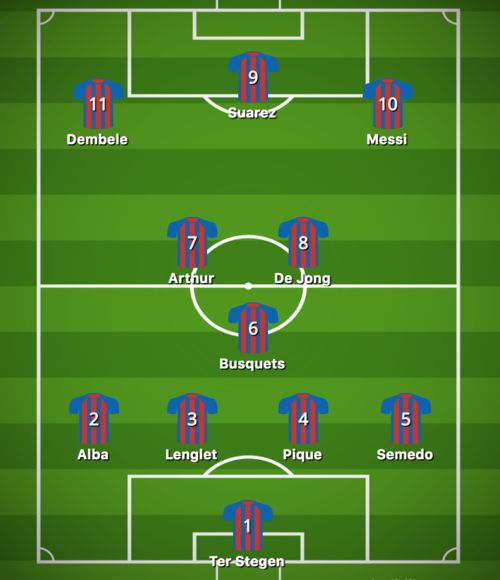