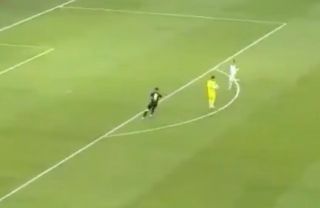 Konyaspor goalkeeper Serkan Kirintili made some unwanted history on Monday night after one of the most bizarre gaffes of all time.

The 34-year-old started in his side’s 2-0 defeat to Yeni Malatyaspor, but he was given his marching orders less than 20 seconds into the encounter.

As seen in the video below, he decided to come out and collect a long ball forward and was well outside of his area but still decided to use his hands and nonchalantly grabbed the ball in the air.

Reality then set in as he dropped the ball and began walking off the pitch immediately as he realised he had just dropped an absolute clanger.

It’s hard to believe that he got his bearings so badly wrong, but he has now earned himself a place in the Turkish football history books as that is the fastest ever red card.

He’ll no doubt be gutted that his side lost after being at a numerical disadvantage for so long, but this clip is going to leave him red-faced for a long, long time too…

Stop what you are doing and WATCH this now ? Serkan K?r?nt?l? broke the record for the earliest sending off ever in Turkish football history when he did this ???????? pic.twitter.com/oCfHLvQYjS