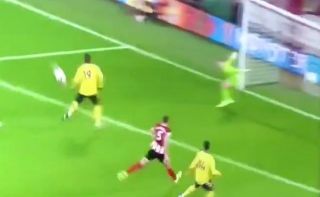 Nicolas Pepe hasn’t had an ideal start to life at Arsenal so far this season, and this miss certainly won’t help his confidence.

The 24-year-old has managed just one goal and two assists in eight Premier League appearances thus far, with BBC Sport noting that he arrived for a club record fee of £72m this past summer.

For that type of investment, he would undoubtedly have hoped to make a bigger impact, but his struggles continued on Monday night at Sheffield Utd.

As seen in the video below, Pepe found himself in a great position to break the deadlock but fluffed his lines and couldn’t get the right contact on the cross when in an ideal spot to find the back of the net.

It was made worse for him and Arsenal as the hosts found a breakthrough shortly after, and so it could prove to be a very costly miss for the visitors in a game that they know if they could secure all three points, it would move them up to third place in the Premier League table.

75 MILLION POUNDS FOR THIS ?? pic.twitter.com/wXxR6eK22a