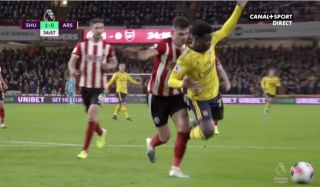 Loads of football fans took to Twitter this evening to hammer Arsenal youngster Bukayo Saka, after the teenager dived against Sheffield United in an attempt to win a penalty.

After just going 1-0 down, Arsenal looked like they were going to be given a chance to equalise against Sheffield United after Saka went down in the area.

However, referee Mike Dean ended up booking the youngster for a dive, something that sparked uproar between fans on Twitter.

Following this incident, fans far and wide took to social media to slate the youngster for his attempt at winning a penalty against the Gunners this evening.

Do you think that was a spot-kick? Let us know down below…

Bukayo Saka is airbourne before the Sheffield United defender even gets close to him. Horrible dive there. #SHUARS

Blatant dive that from Saka. #SHUARS

Saka waiting for contact there. Right foot lingering for the Sheffield defender to get near. Cheating plain and simple.

There’s Arsenal fans arguing that was a pen on here yk ? that was a clear dive awful from Saka