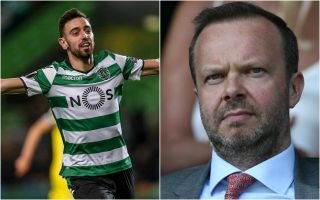 The Portugal international was repeatedly linked with the Red Devils throughout the summer but ended up staying put at Sporting for the time being.

United could have done with an attacking midfield signing of Fernandes’ type, but Woodward suggests there was not as much to the story as was made out.

Speaking to United We Stand, as quoted by the Metro, the MUFC chief explained that it was common for players to use the club as a way to land themselves a new contract.

When asked about the Fernandes transfer rumours, he said: “We’re usually after three players, so we might be talking to nine in reality.

“What you are referring to in the original question does happen, but it’s less likely to happen give our closed-door approach to recruitment targets. But it does exist and we have to be wary of that [players using the club].

“Sometimes, the amount of time a player or his agent invests into discussions, meetings and contracts shows that there is an interest.

“If it was only a flippant interest then they could go and put a fake story then go to a club president and go say ‘Look at who is in for me.’ That happens all the time as well.

“From our perspective, we have to try and see through it and make sure that the club is not being used. We don’t waste time, we’re more robust.”