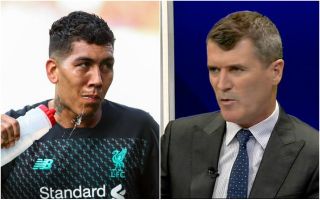 Liverpool star Roberto Firmino has responded to Roy Keane’s stinging attack on players hugging and kissing in the tunnel ahead of Sunday’s clash with Manchester United.

The Brazil international was one of the players seen engaging in the pre-match friendliness that irked known hard-man Keane, who certainly wouldn’t have been seen dead doing that kind of thing during his playing days.

Keane even went as far as to say he was disgusted with what he saw before this big game, with Man Utd and Liverpool long sharing a bitter rivalry.

Firmino, however, saw no issue with what went on and insists it doesn’t affect the strength of the rivalry on the pitch once the game gets going.

“I don’t want to create controversy with anyone,” he told ESPN Brasil, as quoted by the Liverpool Echo.

“I find it quite normal before the game to greet each other, ask how they are doing. That’s all. Nothing more than that.

“But on the pitch, they aren’t friends, each one defends his club to the best of his ability. Then the rivalry increases on the pitch.”

It’s clear there is something of a culture clash between Keane’s generation and this one, but most fans won’t be bothered about it as long as they genuinely feel their players are giving it their all to get results.