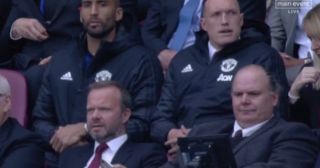 Manchester United executive vice-chairman Ed Woodward has spoken out about that recent viral video clip of him appearing to tell off Phil Jones for singing along with ‘sacked in the morning’ chants from West Ham fans.

That clip did the rounds for a few days after United’s recent 2-0 loss against the Hammers, as it really looked like Woodward was berating Jones for joining in with the digs at Red Devils manager Ole Gunnar Solskjaer.

Of course, this always seemed slightly unlikely, and Woodward has now attempted to clear up the confusion, stating he was not even talking to Jones, but to club secretary Rebecca Britain.

Woodward also claims he was simply asking her if West Ham defender Issa Diop got a yellow card for a challenge.

“Phil was talking about whether decisions were offside or not,” Woodward told United We Stand, as quoted by Goal.

“There was a foul and I turned around to Rebecca Britain, our club secretary [and said]: ‘Was that a yellow card on him? [Issa] Diop?'”

United were pretty awful that day as they suffered a 2-0 loss, and it’s perhaps little surprise that a silly rumour like this was able to take off in those circumstances.