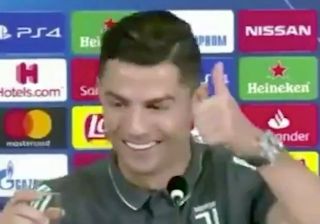 Juventus face Lokomotiv Moscow in the Champions League on Tuesday night, but you wouldn’t have guessed it in their pre-match press conference on Monday.

Much to the surprise of Cristiano Ronaldo, the Portuguese superstar wasn’t asked about Juve’s opponents this week by a single reporter, as seen in the video below.

While the press conference was largely dominated by questions specifically related to the 34-year-old and his future, it seems as though few were interested in his thoughts on the upcoming game.

Juventus coach Maurizio Sarri was also in attendance and so naturally he was asked about the clash that awaits his side and the tactical side of it, but ultimately Ronaldo had to reserve his views on the opposition and the match in question to himself.

That even surprised him as he couldn’t help but raise the point, trolling the media in the process as they snubbed arguably the biggest talking point that they could have discussed on Monday evening…

Cristiano Ronaldo was surprised nobody wanted to talk about Lokomotiv Moscow ahead of their game ? pic.twitter.com/ZbihtKE95L