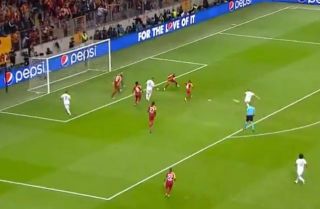 Real Madrid couldn’t afford another slip up against Galatasaray, and Toni Kroos ensured that they took the lead in the crucial encounter.

It’s been a difficult start in the Champions League for Zinedine Zidane’s men so far this season, as they’ve lost to Paris Saint-Germain and were held by Club Brugge at home.

In turn, as they sat bottom of Group A ahead of kick-off, they knew the importance of the clash in Turkey this week, and they will have felt huge relief to draw first blood.

As seen in the video below, Eden Hazard does brilliantly to show composure and vision to play a cut back into the path of Kroos who passes it into the back of the net, albeit it appeared to take a deflection on its way too.

Nevertheless, it was still a well-worked goal from Real Madrid, and they’ll be desperate to now hold on to their advantage to secure three vital points.