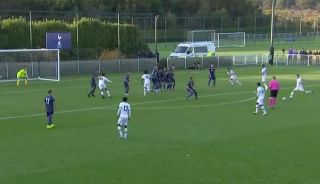 Tottenham U19s were in fine form on Tuesday as they secured a 9-2 win over Red Star Belgrade U19s in a clinical performance.

A flurry of goals came late on as the visitors seemingly collapsed and lost belief, but ultimately the Spurs youngsters deserve plenty of praise too for the display they produced.

There was quality in almost every goal as Troy Parrott helped himself to four goals, but the pick of the bunch came from Harvey White.

The versatile midfield ace has already bagged two goals in five appearances in Premier League 2 so far this season, and he took that goalscoring touch with him into Europe in midweek.

As seen in the video below, the youngster scored with a superbly flighted free-kick over the wall and into the back of the net, and it was certainly one of the more impressive efforts on the day for the hosts as they rattled off a comprehensive victory.

That will be much to the delight of all concerned at the club, but the focus will soon switch to the senior Tottenham squad as they look to follow that up with a win of their own on Tuesday night.

Wow, what a performance by Ryan Mason's side ?

Here are all nine goals including four from Troy Parrott ?? pic.twitter.com/cX13pMFaZE