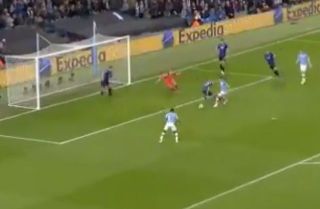 Man City fell behind against Atalanta in the Champions League on Tuesday night, but they showed their quality to bounce back.

Sergio Aguero turned things around with a quick-fire brace, but it was City’s third goal that stood out given the brilliant build-up play involved.

As seen in the video below, they played some excellent football to carve their opponents open, with Kevin De Bruyne at the heart of their attack.

However, Phil Foden played a brilliantly unselfish pass and Raheem Sterling did the rest to make it 3-1, as he went on to score another two shortly after to put the game to bed.

Pep Guardiola won’t be entirely happy with what he saw during the encounter as the visitors did cause his side plenty of problems, but their attacking play undoubtedly made the difference.

Atalanta torn open with KDB at the heart of it. Much needed goal for Raheem. #MCFC pic.twitter.com/wkd6wz3VpL