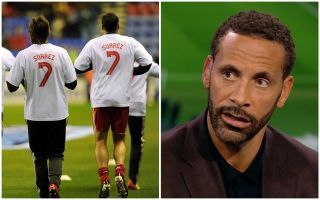 Liverpool great Carragher apologised to former United star Evra for the Reds’ decision to wear controversial T-shirts supporting Luis Suarez after he was found to have racially abused the left-back.

Take a look at what Evra and Carragher had to say on the issue last night.

Evra stated that the decision from the Liverpool players was “ridiculous”.

The United great couldn’t believe that Suarez was being defended after he was handed a ban for the vile racial slurs.

Ferdinand added that Liverpool “let themselves down” with their response to the incident.

Here’s what Ferdinand had to say on the incident:

"Testament to Jamie Carragher for apologising eight years after the incident."

"Liverpool let themselves down that day wearing the t-shirts"@rioferdy5, @GaryLineker, Owen Hargreaves and Joe Hart discuss racism in football, with Rio drawing example from Suarez and Evra in 2011. pic.twitter.com/lkMkrJPv8z

Here’s what Ferdinand had to say, quotes obtained by Mirror Football:

“Testament to Jamie Carragher for apologising, eight years after the incident,”

“But I think it is bigger than Jamie Carragher. It is the club.”

“Liverpool let themselves down that day by wearing t-shirts in support of someone who had been accused of racist language.”

“Eight years on and still the apology hasn’t come from Liverpool. It is not a t-shirt that is going to change it, it is education.”

Carragher admitted his naivety for going forward with the shocking protest, at least the retired England international owned up to his mistake – that’s more than can be said for some of Liverpool’s other players and the club.