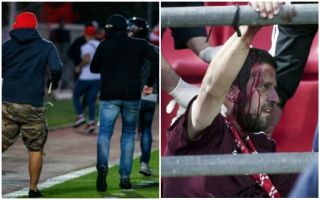 The clash between Olympiacos U19s and Bayern Munich U19s was interrupted late on by hooligans of the former launching an attack.

As seen in the video below, you can see the fans in question make their way over to the Bayern fans at the bottom of the screen before throwing objects and getting involved in clashes.

According to Sky Sport Italia, they attacked with sticks and firecrackers which led to four Bayern supporters being injured.

Fortunately, the violence quickly stopped and there were no more serious injuries reported, while the game concluded with the referee having an interesting method to play out the final few minutes.

As seen below, he got all the players to stand around the centre-circle and essentially pass the ball to each other to play out the clock as Bayern secured a 4-0 win.

Olympiacos hooligans attacking Bayern fans with sticks and fireworks during the youth game between the two teams..
Another proud moment for Evangelos Marinakis' club (an owner accused of drug trafficking and facing match-fixing trial)#olyfcb #OlympiacosFC pic.twitter.com/DPR9hp5H96