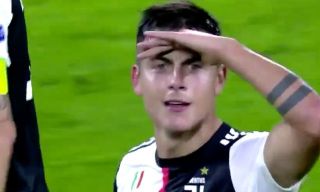 Paulo Dybala rescued Juventus in their Champions League clash on Tuesday night, scoring twice in a 2-1 win over Lokomotiv Moscow.

After falling behind in the first half, the Turin giants were forced to wait until the 77th minute before Dybala struck from distance with a sublime goal.

He completed the turnaround just three minutes later to secure all three points for the reigning Serie A champions, and it does appear as though he may well have sent a message to the Juventus directors with his celebration.

As seen in the video below, it certainly appears as though he looks up in the direction of the directors box which is positioned under the main camera at the Allianz Stadium, and then taps the name on his back to suggest that they should take note.

The Express note how the Argentine ace was linked with a move to Man Utd and Tottenham over the summer, but evidently a switch didn’t materialise and he remained in Turin.

After initially struggling to break into the side under Maurizio Sarri, he has gradually become more influential as the weeks have gone on, and he’s now bagged another two crucial goals in midweek to make the decision to stay look like a smart one.

Dybala scores the winner and takes shots at Juventus director who tried to sell him during the summer ? pic.twitter.com/RvcKuxTobV