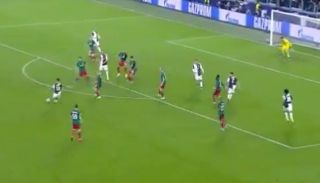 Juventus trailed Lokomotiv Moscow for a large part of their Champions League clash on Tuesday night, but Paulo Dybala eventually found a breakthrough.

Aleksey Miranchuk gave the visitors the lead in the 30th minute, and they appeared set to frustrate the Turin giants and claim a famous win.

However, the hosts weren’t to be denied, as Dybala found the back of the net in the 77th minute to drag his side level, before scoring again just minutes later to complete the turnaround.

As seen in the video below though, it was his first which was the pick of the two goals as he let fly from distance and scored with a stunning curling strike to beat the goalkeeper and spark Juventus into life.

Having been given the nod ahead of Gonzalo Higuain in the starting XI, he eventually managed to prove that it was the right decision from Maurizio Sarri, as Juventus will hope that’s enough to see off Lokomotiv and secure all three points as they continue their fine start to the Champions League this season.