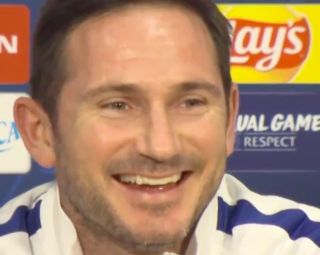 Chelsea boss Frank Lampard produced a brilliant response when he was bizarrely asked by a reporter why he ‘looked scared of Ajax’.

The Blues travel to Amsterdam this week to face the reigning Eredivisie champions in the Champions League on Wednesday night in what is a crucial clash.

SEE MORE: Bad news for Chelsea: Quartet to miss crunch clash with Ajax due to injury

With Chelsea currently sitting in third place in Group H, three points adrift of Ajax, they’ll hope to get a positive result in the away fixture and secure all three points when the two sides meet again at Stamford Bridge in a fortnight.

However, one Dutch reporter was particularly keen to find out why Lampard apparently looked scared of Ajax, suggesting that he was genuinely fearing the thought of playing the Dutch giants.

As seen in the video below, Lampard answered in class fashion by initially joking that it’s just his face while finding the line of questioning amusing, but he showed a more serious side and gave a brilliant response to essentially shut the question down and show respect at the same time.

?? Reporter: Why do you look so scared of Ajax

?? Frank Lampard: That is just my face… pic.twitter.com/20yx06RDLq