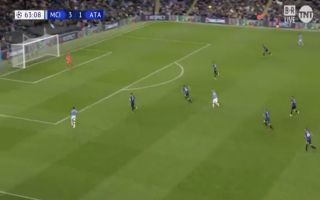 Raheem Sterling scored his second and third goals for Manchester City against Atalanta in the space of five minutes on Tuesday night.

The England international has completed a quick-fire second-half hat-trick which has put City 5-1 up at home to Atalanta in tonight’s Group C clash.

Pep Guardiola’s men fell behind in the first half to a Ruslan Malinovskiy penalty, but two goals from Sergio Aguero made sure the home side went in at half time 2-1 up.

Sterling added a third in the 58th minute and doubled his account six minutes later, leaving the last defender for dead after latching onto a through ball before firing past the goalkeeper.

The 24-year-old grabbed his third of the night when he poked home a pinpoint Riyad Mahrez cross with 69 minutes on the clock, with City now set to extend their lead at the top of their group to five points.

He bags a hat-trick on the night…

And has now been involved in 22 goals across his last 17 home Champions League outings (14 goals, 8 assists) ? pic.twitter.com/cLdvu74ebR