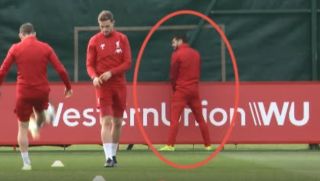 A bizarre video is doing the rounds on social media today showing Liverpool star Adam Lallana having a casual wee during Reds training.

No, we’re not joking – take a look at this clip below as Lallana relieves himself by the advertising hoardings on the side of the training pitch in full view of the cameras…

adam lallana is peeing at the side and no one is bothering him,,, im baffled. pic.twitter.com/PmlYEnxYBu

James Milner seems to be laughing at Lallana for his lack of subtlety, and it’s truly bizarre that the former Southampton man was willing to do this in front of everyone instead of running to the loo.

Lallana scored Liverpool’s equaliser against Manchester United at the weekend, so, in fairness, perhaps feels he can do what he wants now…

Adam lallana pissing on man United’s dreams of beating Liverpool and on the training pitch ? https://t.co/5cmUji84vV

Adam Lallana is displaying either his dedication and love of training or his disdain towards American financial services. https://t.co/WZw7inCynF