This is one of these stories that could be huge in a few years but Man United fans will find it difficult to get that excited about just now. It’s all well and good signing the best talents from round Europe, but that’s unlikely to bring a positive impact to the first team just now.

But you never know, Mateo Mejia could go on to be one of the best players in the world. The story around his signing does have an air of mystery about it but it does seem to be settled and completed.

According to The Sun, United have agreed to pay Real Zaragoza around £130k to sign the talented youngster. They do suggest that Real Madrid were also heavily interested in the player, but United moved first and have agreed a fee without having to get a tribunal involved.

The weirdest thing about the transfer is nobody really seems to know when the player will actually be a United player. Some reports sound like it might go through in the future, but the article from the Sun actually suggests he moved to Old Trafford in the Summer and is already part of the U18 group.

That does suggest the agreeing of this fee is purely a formality after the transfer has already gone through, but it’s still interesting to see United beat out interest from Real Madrid to take one of the higher rated prospects in Spain. 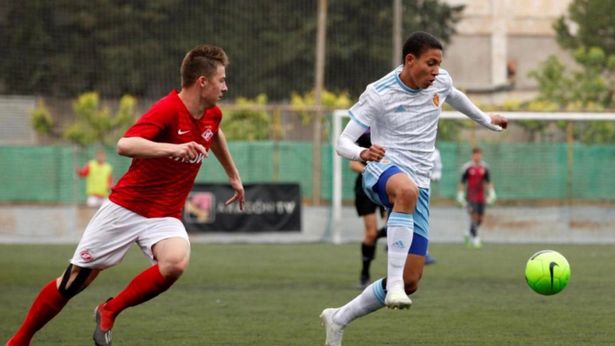 Mateo Mejia in action for Zaragoza

It’s hard to find too much information on the kid, he’s billed as a central midfielder but The Sun claimed he’s scored over 60 goals in the Zaragoza youth team so it’s possible he’s a prolific midfielder, he could also be a striker but there’s a lot of secrecy surrounding him.

Hopefully this fee being agreed means he can now play for United at youth level and he can show what he can do. It certainly sounds like a name to watch in the future.