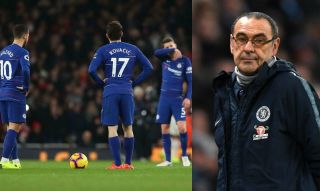 Former Chelsea manager Maurizio Sarri was made to play Callum Hudson-Odoi last season due to the Blues’ fear of losing the youngster.

The exciting young England international has shown himself to be a huge prospect at Stamford Bridge, and arguably one of the finest young players in Europe in recent times.

However, he struggled to force his way into Sarri’s plans last term, with the Italian tactician for a long time preferring more established names like Willian and Pedro alongside Eden Hazard in attack.

In the end, though, Sarri did increase Hudson-Odoi’s playing time, and Chelsea scout Piet de Visser has explained that the former Napoli boss was made to do so by those above him.

“I told Chelsea: never lose Hudson-Odoi. He will be the new Hazard. But Marina (Granovskaia) said: he doesn’t want to sign,” De Visser told De Volkskrant.

Callum Hudson-Odoi in action for Chelsea

“And you know why not? Because Sarri didn’t play him. Then Sarri was instructed to deploy him, and he was their best player. And he signed for four years.”

This turned out to be a good move, as the 18-year-old has since signed a new long-term contract with the west London giants, and is now becoming more of a key player under new manager Frank Lampard anyway.