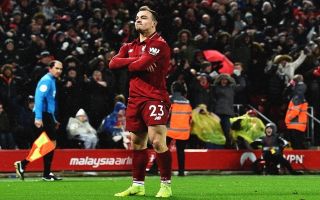 Liverpool manager Jurgen Klopp has hinted that Xherdan Shaqiri is not very far from returning to the Reds squad.

The Swiss international sustained a calf injury last month which has sidelined him till at least now. Klopp said that it has taken Shaqiri a little long than usual to recover but doesn’t expect him to be out of action for long.

Speaking to Liverpool’s official site, the 52-year-old said: “It’s just taken a little bit longer, that’s how it is. We expected him to be back this week, but now he is not here obviously so we will see when he can be back. It’s a really specific thing for him. It is not a big thing, it just takes a little bit longer than we expected and that’s all.”

Shaqiri has made only four appearances for Liverpool this season so far with none of them being starts. The 28-year-old will not be traveling with the squad to Belgium for their Champions League encounter against Genk but will be hoping to be back soon.

Liverpool have a few crucial matches against the likes of Spurs, Arsenal and Manchester City before the next international break kicks in. Shaqiri being fit will certainly be a relief to Klopp as he could always contribute as a substitute like he did on a few occasions last season.